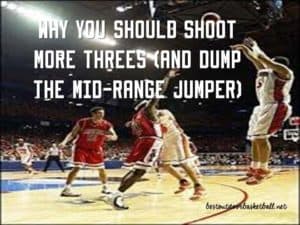 Within the last five to ten years, there has been a sort of revolution going on in the game of basketball.  Gone are the days of the 90’s NBA where the team’s best player would be given the ball with the rest of his teammates scattering on the edges of the court for an isolation one-on-one situation.  Now there is a game where spacing and ball movement (think Spurs) have come to reign supreme.  This has led to teams that are less “big man” oriented, using smaller lineups that value quickness over size to allow open lanes to drive to the hole for kick-out passes, layups, and free throws.

A good question to ask is why has this change taken place?  The answer lies in basketball analytics.  While baseball was the first sport to gravitate to the mathematics of sport, basketball is catching up quickly.  Now anyone can get on sites like basketball-reference.com and NBA.com and find an almost endless amount of statistics on their favorite team or player.

Basketball analytics have changed the way that I think about the game of basketball, and should change the way you think about it as well.  At its core, basketball is a game of decisions and chance.  You can decide to pass (most USA players should do more of this), shoot (most players should do less), or dribble.  When a shot goes up, there is a chance that it will be missed and a chance it will be made.  While this is all very common-sense stuff for anyone familiar with the game, looking at the game of basketball this way can offer some valuable insights.

One of the most profound insights that can be gained from this is the ever-increasing importance of shot selection.  As you know, some shots that you take have a greater chance of going in than others depending on your skill set and where you take the shot on the floor.  If you shoot two different shots worth two points, one that will go in 55% of the time, and another that will go in only 20% of the time, you obviously should be looking to take the first shot and stop attempting the second.

If we look at these two shots we can develop an expected points per shot outcome. If a shot is worth 2 points and you make it 55% of the time, then that shot is worth 1.1 points each time it is taken.  The second shot, on the other hand, is only worth 0.4 points for each attempt (2 pts. X 0.2).  When doing the math you can see the first shot provides almost three times the point value as the second.

However, there is another factor that we have not considered: the three point line. Each three pointer that is made is worth 1.5 two pointers.  Because of this, you do not have to shoot as high of a percentage from three point land to equal the point equity of two point shots.  In fact, you only need to make 33% (or 1/3) of your three pointers to match the equity of making 50% of your two pointers.  In each case, the point value for each shot is 1 point (3 X .33=1 and 2 X .5=1).  Those who have played the game of basketball will quickly realize that making 50% of your two point shots is a lofty goal for most players.  For example, Michael Jordan made 51% of two point field goals over his career. 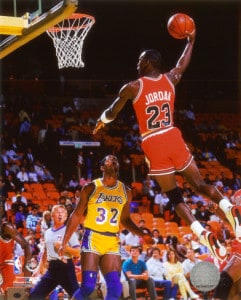 However, making 33% of your three point shot attempts is certainly doable for those with solid outside shooting skills.  For example, Kyle Korver, one of the best three point shooters currently in the league, makes just under 43% of his attempted threes. 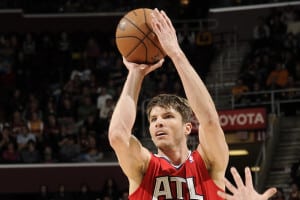 Kyle Korver makes 43% of his three point attempts. This leads to a ridiculous per shot average point value of 1.29.

So, now you can see the value of a good three point shooter for your team.  But why should we minimize or even attempt to eliminate the number of contested two pointers we take in a game?  To understand why you should make this change in your game if you rely on long two pointers let’s get back to MJ for a moment.  As I mentioned earlier Michael Jordan made 51% of his two point attempts over his career; however, he only made 42% of two point field goals that were taken 16 feet or farther away from the hoop.  This trend is also seen in the NBA as a whole.  So far, during the 2014-15 season NBA teams have made 49% of all two pointers taken, but only 40% of two pointers from outside of 16 feet (Of note, the NBA as a whole makes 63% of its shots from within three feet of the hoop).  To match the average point value of long two point shots in the NBA, a player would only need to make 27% of his three point attempts.

Even guards who are not great shooters can at least come close to shooting 27% from three point range, and I would argue decent shooters could easily exceed this, especially in college and high school where the three point line is significantly closer than it is in the NBA.  Yet, almost no player is going to be able to shoot much higher than the 40% average seen in the NBA for long range twos.  Based on this information the contested long range two pointer is by far the worst shot you can take in basketball.

This is why in the last five years the percentage of long range two point attempts taken has dropped off the map in the NBA.  The word is out: if you want to score more points per possession and win more games, look for opportunities for yourself and your teammates to shoot more open threes.

So, how can you apply this newly learned information into your game?  There are a couple things to focus on.  The first is that you should work on your court awareness so that you know where the three point line is when you are moving with and without the ball.  Also, if you catch a pass a step within the three point line and are wide open with time to spare, then take a step back and shoot the three.  When playing defense, try to force your opponent to take mid range jumpers through positioning.  Lastly, teams should work on proper spacing which will open up lanes to drive to the hole which provides for high percentage layups and kick-out passes for open three pointers when the defense collapses.

While you shouldn’t have to know how to do calculus to play the game of basketball, it is important for great players to not only exercise their bodies but also their minds when thinking about how to play the game optimally.  “Ball don’t lie” is a common phrase I hear playing basketball, and my response is “Neither do the statistics.”

FYI- All statistics in this post were gathered using basketball-reference.com