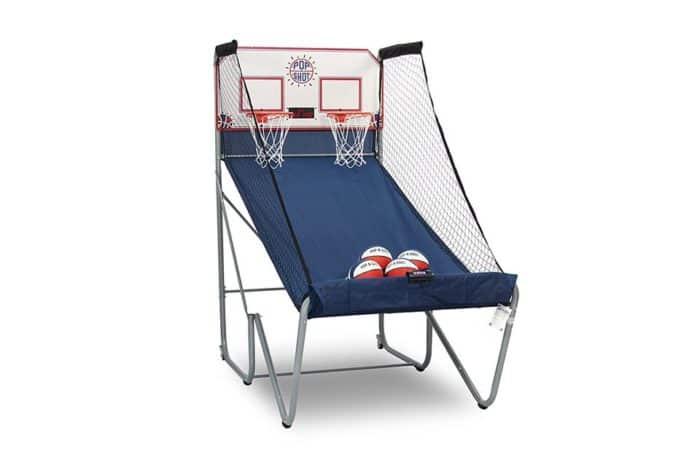 Pop-A-Shot: The Inventors of Arcade Basketball

The truth is that I’ve been overall disappointed with the quality of arcade basketball games that I received to review.  Many of these basketball arcade games had a lot of cool features, but lacked in one very important domain: quality.

So when I was given the opportunity by Pop-A-Shot to review their basketball arcade game I was excited, but cautious to expect too much in terms of the overall quality of the unit.

I received the New Home Dual Shot from Pop-A-Shot to assemble and review.

Below we will break down the assembly process and features in greater detail. 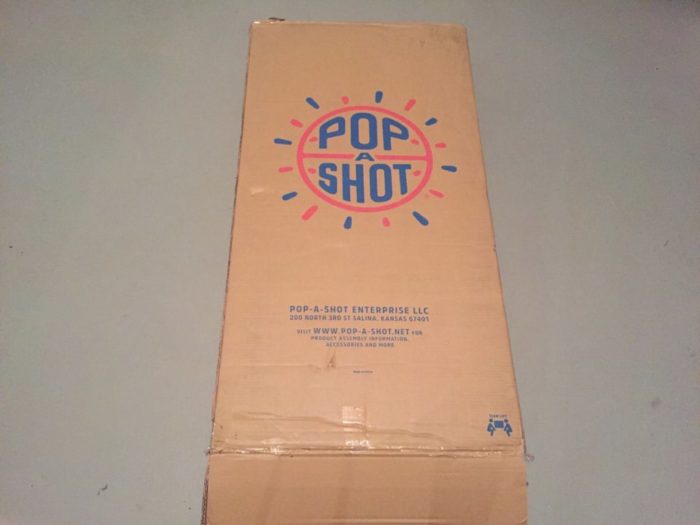 When I received the Pop-A-Shot Arcade from UPS I was surprised by how small the box was.  It was still big, but not nearly as big as I was expecting.  However, it did have a good bit of heft and I needed my wife’s help to get the unit into the basement where I could begin assembly.

Once I began pulling pieces out of the box I was impressed that Pop-A-Shot was able to fit all the pieces into such a small space. 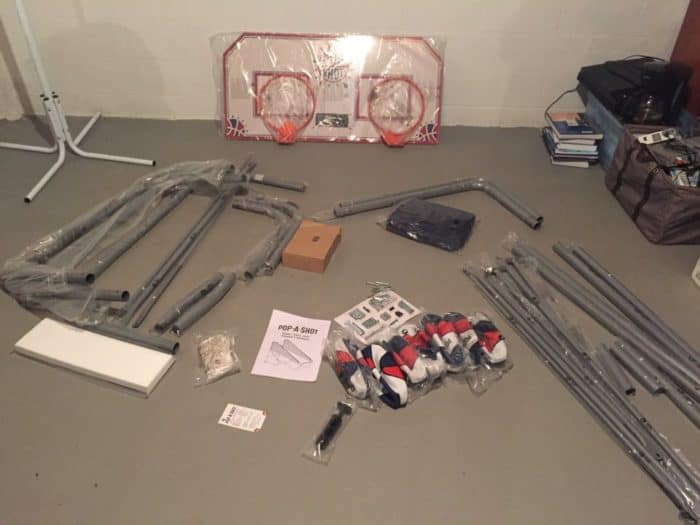 The assembly instructions are pretty easy to follow. There were a couple times when I put pieces on backward, in particular it was not clear which side was up on the scoreboard.  I eventually conferred the Pop-A-Shot website for confirmation. 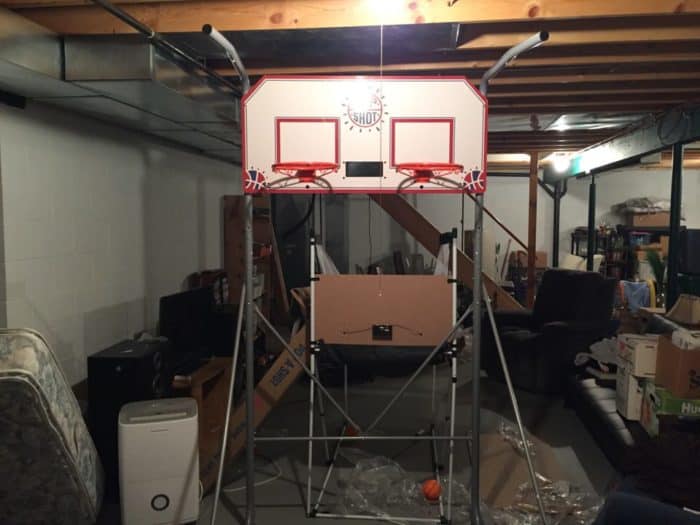 Midway into assembly of Pop-A-Shot

One area I hope Pop-A-Shot changes is the screwing in of the scoring sensors.  The scoring sensors are screwed into the backboard, which takes a lot of force.  Hopefully they consider a new method in the next update that is a bit easier.

In the end, it took me around 2-3 hours to completely put the basketball arcade together. This was a slightly more difficult than average assembly compared to other basketball arcades I’ve put together over the years. 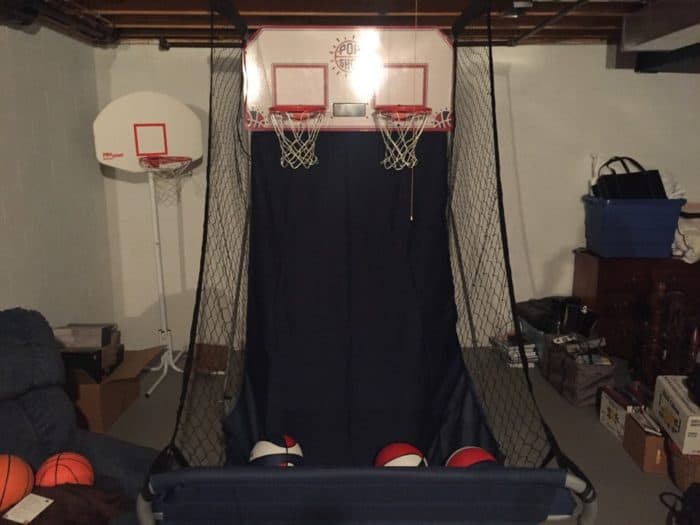 I gave the dimensions of the Pop-A-Shot Basketball Arcade above (click here to review dimensions).

Simply put, this is by far the largest home basketball arcade system that I’ve used.  It does have the two height extension bars, of which I was only able to use one due to my ceiling being too low for both. 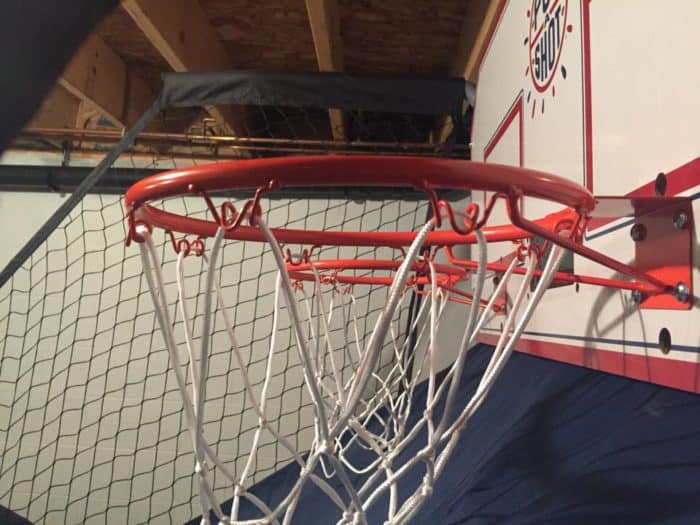 I’ve found the rims on many other basketball arcade games to be subpar, with a tendency to break at the weld points over time.

This does not appear to be an issue with the Pop-A-Shot.  The rims on this system are higher quality and extra firm.

I prefer the extra firm rims as they require pinpoint accuracy to make buckets.  I find that softer rims make bank shots too easy, in turn making for a less authentic basketball experience.

Whether you prefer the rims on the Pop-A-Shot is a matter or personal preference.  Just note that they are firmer than rims on other home basketball arcades. 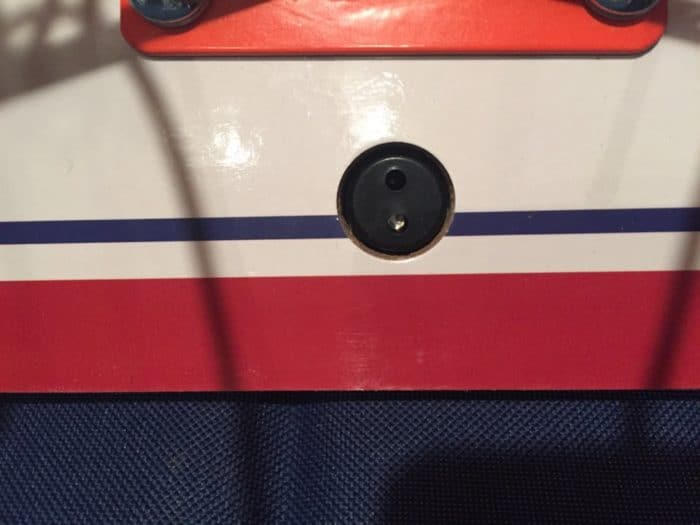 Pop-A-Shot uses top of the line infrared scoring sensors.  Infrared sensors are far more accurate than scoring mechanisms that rely on a lever.

I’ve played many games on the Pop-A-Shot now, and over the hundreds of baskets I’ve made only a few have not been counted. 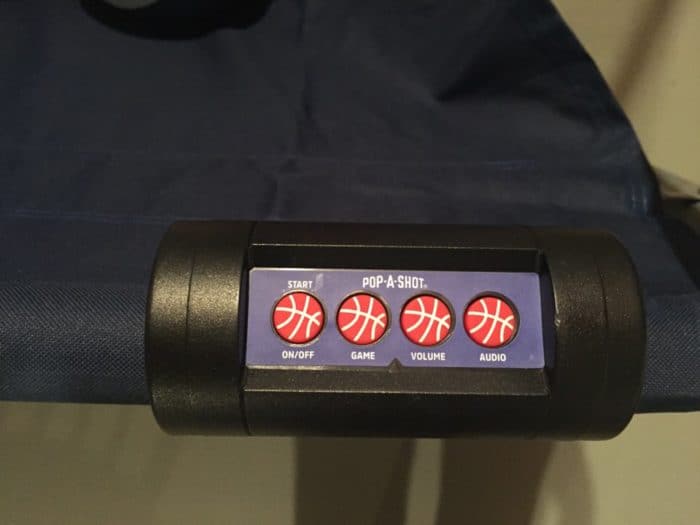 Each Pop-A-Shot Basketball Arcade comes with a control panel that attaches to the front rail of the frame.  The control panel makes it easy to turn the game on and off, select your game mode, change the volume, and change the type of audio you hear while you play.

The first three buttons on the control panel are fairly self explanatory, but I wanted to give you a summary of the different audio options that come with the Pop-A-Shot.

This is a pretty cool feature and not something I’ve found on other basketball arcades. 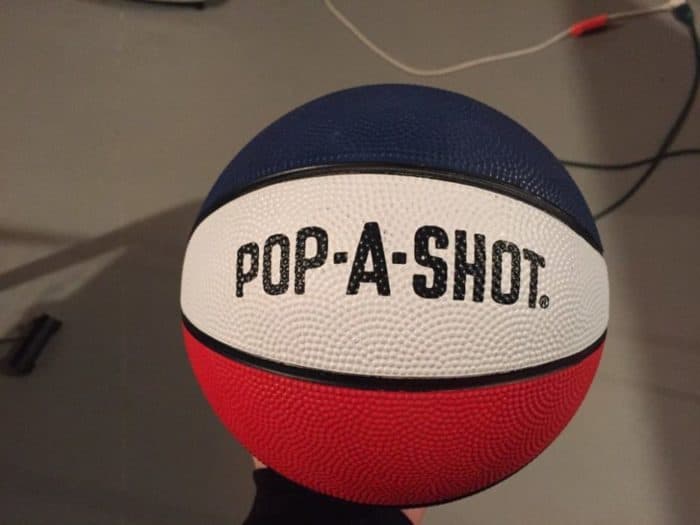 The Pop-A-Shot Basketball Arcade comes equipped with seven mini basketballs.  Most other basketball arcades only come with four basketballs included. Compared to the basketballs from other arcades these seem to be slightly larger.

Other than the increased size and quantity, the quality of the basketballs included with the Pop-A-Shot are basically the same as those included in other basketball arcades.  They are made of rubber and get the job done, but nothing special.

There are really two distinct types of shooting skills necessary that cover all ten game modes.  In any of the standard game modes, where the goal is to score as many points as possible in an allotted time, you need to shoot as many shots as possible.  This means alternating single hand shots so that while one hand is shooting the other hand can be grabbing another basketball to shoot immediately.

For the precision game modes, like Skeet Shooting and Sharp Shooter, you need to have a pure shooter’s stroke to achieve high scores.  Focus on developing a repeatable shooting motion so that the ball drops in time after time.

Either strategy may be successful in the Double or Nothing game mode.  Honestly, I have not played this game mode yet so I do not know which strategy I prefer.

I like arcade basketball games that closely resemble actual basketball game play.  For this reason I enjoy Skeet Shooting and Sharp Shooter the best.  Out of these two I probably spend 70% of my time playing Sharp Shooter.  The back and forth shooting between the two hoops is challenging and fast paced.

I like Skeet Shooting as it mimics the pressure of taking a last second shot, but wish there was not quite as long of a pause between countdowns. 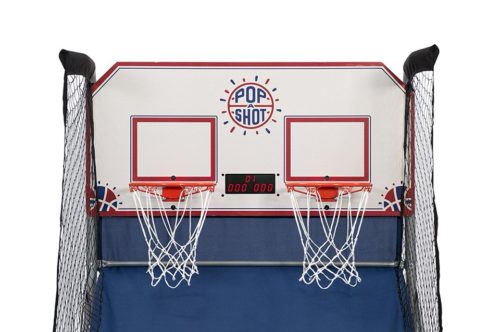 I’ve now had the chance to assemble and review several basketball arcade games.  I want to take a moment to thank the companies that have provided me this opportunity.

Pop-A-Shot has a decent number of features for a basketball arcade.  The ten game modes are all fun, but I’m sure most players will settle in on one or two favorites. I also enjoy the different audio options that are included with this basketball arcade.

I would like to see Pop-A-Shot take a page out of the Shaq Cyber Hoop Shot in the future and come out with an app that allows you to compete with other players who have Pop-A-Shot arcades.

Assembly of the Pop-A-Shot was time consuming, but not altogether difficult.  Take your time to make sure the pieces are not on backwards so that you don’t have to do multiple steps over again like I did.  Assembly is third on my list of priorities because it only has to be done once, so spending an extra hour or two for a high quality basketball arcade game at the end is easily worth it.