Shooting in basketball may be the single most important part of the game.  If you can shoot the ball almost every coach in the nation will find a spot for you on their team.  Also, being a great shooter allows for aging professionals to continue playing for several years after their physical prime.  A couple recent examples of players who fit this mold include Mike Miller, Ray Allen, and JJ Redick.  These sharp shooters continue signing contracts because they can simply get the ball in the basket from deep. 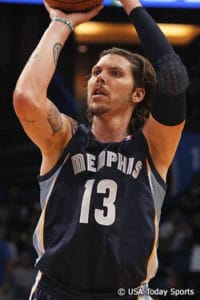 Mike Miller has extended his career by becoming a deadly shooter.

So how do they do it?  How are they able to make such a high percentage of their three point attempts?  Well, the first thing they have are impeccable mechanics that are repeatable and result in quick release shots that have optimal rotation and arch angle.  But there is another characteristic that each of these players have in common that is separate from their pure shooting strokes.  What they share is how all three think about the shooting process.

In almost every sport there is an aspect of the game that has an element of chance involved.  In baseball, every time you walk up to the plate you have a chance to get a hit.  The majority of at bats you will not get a hit, and your at bat will result in an out.  Shooting in basketball is very similar.  Each shot you take has a chance of going in and a chance of being a miss.  For the 2014-15 season in the NBA, players collectively make an average of 45% of their shot attempts.  So, for the average NBA player they will miss more shots than they take.

We generally look at shooting as a black and white activity.  If you make a shot then you have succeeded, and if you miss you have failed.  There is no in between.  This type of thinking is called results oriented thinking. Basically, you are focused on the result of the shot.  Results oriented thinking treats shooting like a roulette wheel. This is how the vast majority of amateur basketball players think about shooting.  Thinking about shooting a basketball in this way will often lead to inconsistent shooting where misses lead to a lack in confidence and over time can lead to a fear of shooting.

So, if you should not focus on makes and misses, then what should you focus on?  Your focus should be on the process of shooting.  Basically, you should be thinking about the mechanics of your shot.  For example, when attempting a shot focus on powering up through your body and following through properly with your wrist (if you want to learn how to shoot properly, visit this article).  By placing your thoughts squarely on the process of your shot and not the result, you will become a more consistent shooter as you will worry less about whether or not your shot goes in (the result).  This type of thinking is called process oriented.

Process oriented thinking will change how you regard shooting.  To grasp this concept view your shooting like you would your car.  If all things are working correctly with your car then you know it will get you from point A to point B.  However, what if your car won’t start?  Your first thought will be “What is causing my car not to start?”  Or in other words, what part of the process is breaking down that leads to a result that I do not like?  The process is primary while the result is secondary.

Realize and accept that you will likely miss more shots than you make in a game.  Continue to strive to improve your shooting percentage from each spot on the floor, and when you lift up to take the game winning shot make sure that your thinking is something like “follow through, follow through” and not “You have to make this shot.”