Well we took a couple months off from our move of the month segment due to other commitments, but we are back for May!  Today we are going to deep dive into one of the most fundamental dribbling moves used in basketball; the crossover.

While discussing the crossover may seem boring to some, remember that there are a number of varieties to the crossover dribble and that at its core, basketball is about perfecting the fundamentals of the game.

When most people think of the crossover dribble, Allen Iverson comes to mind.  He made a career of breaking the ankles of his opponents through his devastating crossover.  But Iverson primarily used one type of crossover dribble when there are several to choose from.

Become a more well rounded player by mastering each of the crossover dribbles we discuss below.

FYI, we know that some consider behind the back and between the legs dribbles as crossovers as well, but for this article we are specifically talking about dribbling the ball from one hand to the other without any other extra elements.

This is the crossover that Iverson made famous by his perfection of the move.

Generally, the killer crossover is done by jab stepping in one direction and crossing over to the other hand going in the opposite direction.

To make the move more effective you should work on mastering the jab and making your dribble wider and lower.  Make sure to really “sell” the jab step with your head and body to get your defender to commit to the fake.

Here is a video with an in depth description of the killer crossover: 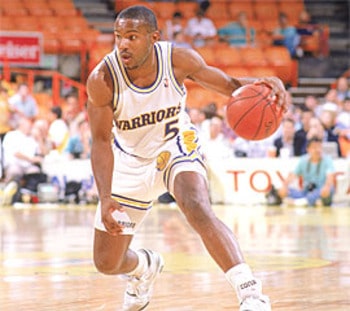 If you want to see an example of a top notch speed crossover take a look at any Tim Hardaway highlight video.  The dude killed with quickness.

Yet, if you are like me you value how effective a move is and not how fancy it looks.  Hardaway used his crossover with great success, and if you are a player who has above average foot speed you can do the same.

For this crossover move we go back in time to when afros abounded and basketball shorts hugged your little walnuts tighter than OJ Simpson’s glove.

Pete Maravich was one of the most innovative basketball players of all time.  Certainly not the most athletic but had skill for days.  If you are like me and not overly athletic look to some of Pistol’s tricks to help you beat more athletic opponents.

One of Maravich’s most fundamental moves was his crossover.  As with all things Pistol, Maravich’s crossover came with a unique wrinkle to make it uniquely effective.

I never see this type of crossover used today and I promise you if you work on it you will fake your opponent out of his shoes when it is game time.

Check the video to see this unique move in action:

This is one of the most successful moves in my offensive arsenal.  The double cross over is a good alternate move if you’ve been hitting your opponent with a lot of killer crossovers.

To pull off the double crossover execute your typical crossover but when the ball hits the ground quickly dribble the ball back to your original hand and drive to the basket.  This quick dribble often gets your opponent off balance and allows you a clear path to the basket where you can either score or get fouled.

Here is a good video showing the double crossover:

Alright guys, there are four different crossover variations you should look to add to your game. We will try to keep up to date with our moves of the month segments from now on 😉