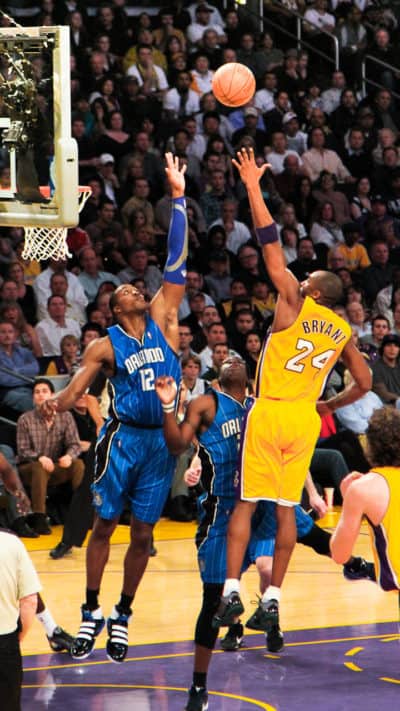 Welcome to our June edition of our Move of the Month series.  Today I want to discuss and shot that has become more popular over the years due to it being used frequently by shorter less explosive players.  The shot I am talking about is the floater, also known as the runner or tear-drop.

You see the floater is really a high arching shot that a player sort of pushes up into the air, which is a bit different from a typical jump shot where both hands stay on the ball longer and is not released in a pushing motion.

As I mentioned floaters are most often used by shorter point guards who otherwise may have their shots blocked if they try to go into the paint for a layup.  The floater is used as a way to avoid the block while still getting a shot off that is close to the basket.

When To Use The Floater

I generally most like to use the floater when I am able to beat my defender off the dribble and I see a bigger player come over to help on defense.  Before the bigger defender can get set and block my layup I can quickly get the floater shot off.  As with this example the floater is most effective between beating your defender and the second line of defense made up of a post player.  Due to this the float is often shot within the painted three second area.

Examples of the Floater in Action

I’ve found through this move of the month series that explaining a basketball move using text is a pretty difficult task.  As someone who learns best through visual aids, here are some video tutorials and example on the Floater.

In this first video Coach Rock explains the Floater perfectly.  I’ve watched many Coach Rock videos and can say this guy can play the game and has a way of teaching that is clear and concise.

This next video is the top 10 floaters during the 2012-13 NBA season.  I like to watch videos of game action to give me different ideas and ways to use a certain move in a game.

How to Master The Floater

To master this move you really have to practice it consistently.  At first it will feel a bit weird because it is not exactly like a jump shot or a layup.  However, once you get used to the motion you’ll quickly be able to control the arch of your shot and become more accurate over time.

Another tip is to practice this shot using both the left and right hands, just like you would for a layup.  Having this versatility in your floater will help you avoid getting blocked and make you a more dynamic player overall.