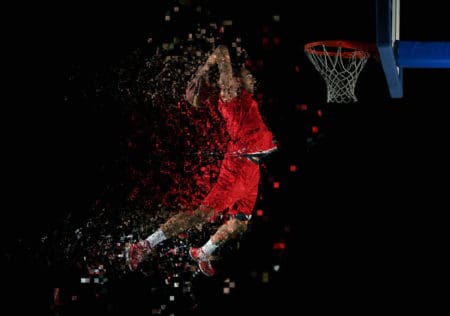 As you may have noticed from previous articles I have an unhealthy fascination with the three point line and how it has changed the game within the last 10 years in dramatic ways.  Most of this romantic obsession is due to my tendency to be drawn to analytics.

The enhanced focus of the three point line by NBA teams means that the type of player who has success in the league has changed.  Move over Roy Hibbert and make room for Giannis Antetokounmpo.  Now versatility is the name of the game, teams want players who can dribble, pass, and shoot while remaining strong enough to take it to the hole.

There is hardly any argument that these changes have made the NBA game way better.  It is 10x more watchable and entertaining than the glorified 1 on 1 isolation style from the 90’s.  I know Charles Barkley disagrees, but the dude and every other player from the 90’s era is suffering from a Mount Everest pile of cognitive dissonance.

However, there is a inherent weakness in this modern style of basketball.  As a shooter, I’ve always felt that making a three point shot was an easier proposition than putting in the physical effort to get to the hole. The reason for this is that a three point shot does not require a complete collapse of the defense.  On the other hand, a dunk almost always signals that the defense failed in the objective of keeping the offense away from the basket.

Because dunks almost always signal a serious mistake by the opposing team they should be rewarded by being worth an extra point.  I propose this for the NBA only as almost all NBA players are capable of dunking, while most high schoolers only dream of throwing it down.

Here are three things that would happen if you made dunking worth three points:

Everybody loves dunks.  It gets the crowd excited and can turn the momentum of the game in an instant.  If dunks were worth three points then you can bet you’d see guys trying to throw it down as opposed to getting a layup.  This would also create more resistance from the defense on a dunk attempt, situations where there would be either posterizing dunks or amazing blocks.  All of this would be very exciting and get everyday fans to buy tickets.

Remember the big man?  He was the center who was an unstoppable force on both ends of the court.  Kareem, Shaq, Wilt, Ewing, and others come to mind.  With the new emphasis on spacing this position has become obsolete.  If dunking was worth three points the big man again would reign supreme.

“Yo girl, I know you want the big man back in your life.”

3. The Nail In The Coffin For The Mid-Range Jumper

What do you guys think?  Would you like to see the dunk be worth three points, or am I just a crazy guy on his keyboard?  Let me know your take in the comments.