When To Use The Behind the Back Dribble

The behind back dribble is best used in two specific situations: transition and off the dribble. 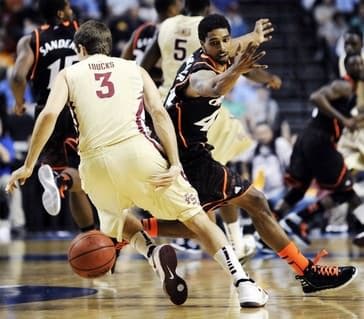 The first situation where the behind the back dribble can be very effective is in transition.  Usually, you’ll have the ball in a fast break moving quickly toward a somewhat stationary defender.  When you approach the defender you can use a behind the back dribble to quickly change directions to the hoop, making it difficult for the defender to stay in front and giving you a solid chance at an open lay up.

Here are the steps:

1. Dribble the basketball while moving at a fast speed in transition
2. As you approach a defender give a quick jab step to the direction in which the defender is overplaying
3. Bring the ball around your back to the other side while keeping your momentum and speed
4. Drive to the basket

Using the behind the back dribble to create space for a jump shot or drive is the other common scenario. Stephen Curry and Kyrie Irving are the two masters of this move in today’s NBA.  The true “secret” to making this move effective is footwork.  If you have slow feet then you won’t be able to shake your defender no matter how good your handle.

Another interesting facet to the behind the back dribble is that it looks a bit different depending on which situation you use it.  For the transition situation, you will bring the ball behind your back and push it forward so that you can continue the fast-break without slowing down.

For the off the dribble situation, the behind the back dribble looks more like a standard crossover move with the ball behind your back.

Here is Coach Rock who explains the difference: