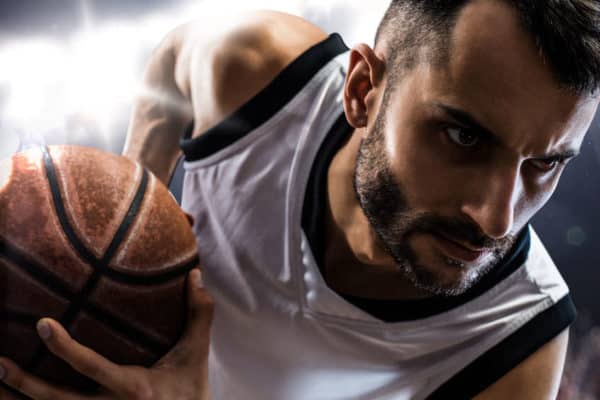 Everyone loves those moves that remind us of the old And 1 mix tapes that leave defenders with two broken ankles looking dejected while they helplessly fall to the floor as their opponent breaks to the goal for an easy dunk or lay up.  The truth is that these moves are rarely pulled off in actual game play and will more often lead to turnovers and traveling violations that can crush a team’s momentum.

In fact, I believe you really only need to master these five offensive basketball moves to become extremely difficult to defend and will provide you with plenty of opportunities to score or set up your teammates for easy buckets.  Make sure to practice these moves on your own trying to improve your efficiency of the movements and to better sell your fakes.

1. Take a couple dribbles either on the break or from the perimeter while moving toward the goal.

2. Slow down quickly and allow your body to become more vertical giving the appearance of a pull up jumper or pass.

3. Once you see your defender hesitate and become vertical drop your shoulder and make a break toward the basket.

There may not be another basketball move with so many unique variations than the crossover dribble.  The crossover allows you to switch hands effectively and provides the opportunity to get your defender off balance which creates space to drive, shoot, or pass.  If you are a player with superior speed you may want to make your crossover lower, focusing on getting the ball into the other hand as quickly as possible so that you can speed past your defender (see Tim Hardaway).  If you are a player who’s strength is quickness and can sell fakes well, then you may want to take a wider angle with your cross to really promote the fake (see Allen Iverson).  Be sure to experiment during practice sessions and pick up games to see what style of crossover is most effective.

1. Take at least one dribble with the hand that will initiate the crossover

2. Jab with the foot that is on the same side of the ball

3. Quickly dribble the ball over the other hand while continuing to sell the fake (make sure you stay low in this process)

4. Drive to the basket

3. In and Out Dribble

Let’s say you’ve been successful in crossing up your defender several times during a game.  Now you see they are beginning to cheat because they are expecting the crossover to come again.  One of the best moves to use to counteract this defensive cheating is called the in and out dribble.  This move does take practice to really get down to where you can manipulate the basketball in your hand and sell the fake while staying smooth throughout the motion.

In and Out Dribble Steps

1. Attack the defender by driving right at them

2. Once a step away jab with your off ball foot using your body to mimic the motion of the crossover dribble

3. Bring the ball inward to simulate the crossover, and then quickly move your hand around the ball to the inside a push outward

4. When defender becomes off balance drive to the basket

The pump fake may be the most effective and most simple move in all of basketball.  If you want to become a quality player then you MUST have a good pump fake.  This move works best when you notice that your defender is aggressively challenging your shot by jumping each time you take a shot.  Often these defenders are hyper aggressive and athletic.  To exploit this aggressiveness you should use the pump fake.  Anytime your defender leaves his feet it will allow you to either dribble by him or get fouled by putting a shot up into the leaping defender.

1. Put the ball into a shooting position and bend at the knees to mimic the shooting motion

2. Bring your arms up with the ball and begin to extend your body

3. Quickly stop this process and evaluate if you defender has left his feet

4. If they have left their feet, quickly drive to the basket or jump into the leaping defender while shooting to draw a foul

5. Behind the Back Dribble

The behind the back dribble is a great move to use when in transition or when you see a defender overplaying one side trying to get a steal.  In these situations it allows you quickly change directions and leave the overplaying defender empty handed.  I think my favorite aspect of this move is that once you become good at it you do not have to hesitate and can keep moving at full speed during the move.

In this video be sure to focus on the second version of the behind the back dribble as this is often the more effective move to get to the goal.

Behind the Back Dribble Steps

1. Dribble the basketball while moving at a fast speed in transition

2. As you approach a defender give a quick jab step to the direction in which the defender is overplaying

3. Bring the ball around your back to the other side while keeping your momentum and speed

4. Drive to the basket

So, there you have it.  These five moves can be mastered by almost anyone if they take the time to practice and use them.  By learning these moves you will no doubt become a more effective basketball player, and will have many of the most important offensive tools necessary that will make you difficult to defend and will leave your opponent with sore ankles.