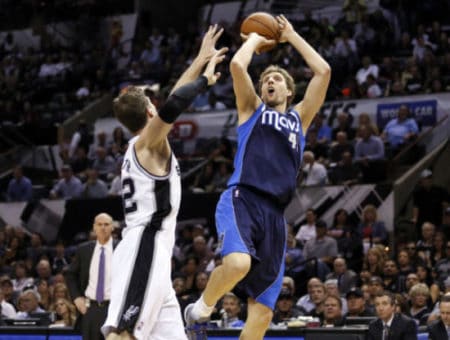 Another month closer to the start of the basketball season means it is time to really dig deep in your off season training so that when your big moment comes you can shine.

In August’s version of Move of the Month, we are going to break down one of the most used mid range shots: the fadeaway jumper.

Similar to the floater, which we discussed in our last installment of move of the month, the fadeaway jumper is utilized as a way to create space between an offensive player and a defender.  By jumping away from the basket the fadeaway is much harder to block compared to a standard jump shot.

When To Use The Fadeaway

Most of the time the fadeaway is used by powerhouse offensive players in a set up isolation situation.  Kobe Bryant and later years Michael Jordan really relied heavily on getting the ball in a post up position and shooting the turn around fadeaway with killer accuracy.

Another instance to use the fadeaway is when driving to the middle of the paint and pulling up for a fadeaway in a crowd.  This will keep your shot from getting blocked and allow you to get a clearer look at the basket.

The Fadeaway in Action

As always I’m going to show you a couple of videos showing you how to do the fadeaway.  I could make my own videos on the subject, but these guys do a great job explaining it and honestly are better at the game.

The first video breaks down the most famous fadeaway jumper of all time.  Take specific note as the narrator explains how MJ would decide on which direction to turn based on his defender’s actions.  All great scorers look to exploit weaknesses of their defenders.

The next video is from Jesse “Snake” Muench, who is well known for his ridiculous handles and streetball dribbling skills.  But dribbling isn’t Jesse’s only skill, and in this video he does a great job of breaking down the two main types of fadeaway jumpers and when to use them.

How to Master The Fadeaway

There are a couple main things to consider when working on your own fadeaway jumper.  Here are a few tips that I think will be of importance:

Know when to use the fadeaway

There are a couple situations where the fadeaway is most advantageous.  First, is with your back turned to the basket in a post up situation.  This is great for isolation plays and can be seen in highlight videos of Michael Jordan and Kobe Bryant in particular.

The other is when you are in the lane but do not have enough time to completely square yourself up to the basket and need to avoid a defender’s outstretched hand.  Using the fadeaway allows to create the necessary space to get your shot off.

An NBA player who mastered this fadeaway is Dirk Nowitzki.  At seven feet tall his one foot fadeaway is unstoppable.

Work On Both Sides of the Turnaround Fadeaway Jumper

If you watch Michael Jordan highlights you’ll quickly realize he could shot the turn around fadeaway from both shoulders with ease.  You should work to be able to do the same.  I’ve found that turning to your strong shoulder is easier than the your off hand.  But don’t rest on just practicing the easy side, learn to do the turnaround jumper both ways.

Only Use the Fadeaway When Necessary

When playing in my local gym I often see players making shots tougher than they need to be.  And a big part of this mistake is using the fadeaway when it isn’t needed.  Making good decisions on the court is half the battle to being successful.  If you can get away with taking a standard jump shot then take it, it is an easier shot and you’ll make more of them.